Tomorrow I'm flying off to LibertyCon

And the airlines are of course going to do everything they can to make this trip less than enjoyable.
I leave the house here at noon, I arrive in Nashville at midnight, then drive a couple of hours to get to the con.

Why am I doing this again?

Anyways, I hope to make some new friends and maybe meet a few old ones. Time will tell. I just hope as trips go that the traveling part of it doesn't suck. I remember when flying used to be fun. Sadly everyone has done everything they can to wring the joy out of it.
Posted by J Van Stry at 11:17 PM No comments:

Apparently no one makes actual maps of the Moon.

Because actual maps have a -scale- on them to measure distances.
Posted by J Van Stry at 5:10 PM No comments:

Sometimes it slips by you

So, I was reading Kaiju, book number seven in the Portals of Infinity series and I realized I'd made something of a blunder with the first chapter. You see, the first chapter is what I think of as a 'throw away chapter', it's not exactly important to the story, it's more of a setup chapter to bring the reader into the story, without going into anything too important, and it allows me to drop a few hints and made a little foreshadowing before I actually start to hit them with the story and the plot.

What I missed however is that there are some things in that chapter that I should have explained for those readers who haven't read the previous books. I missed it because I wrote that chapter when I was about halfway through the book and I realized I needed a different opening than I had, because it didn't 'flow' the way I wanted it to. I wasn't thinking 'new reader' at that point, and I should have been.

So I think I'm going to go back and re-write the first chapter. Oh, not a major rewrite, I suspect I'll add less than two hundred words to the entire chapter. It won't change any of the story, however I think there are a few things that I should have Will or Nikki make comments or asides to, so new readers aren't left dangling about certain aspects of the story, the characters, and especially the world.

Another little thing on the list of a thousand little things, to keep in mind for the future.
Posted by J Van Stry at 12:39 PM 1 comment:

Whose Bright Idea was that?

Now, it's the opposite. I really want to know what 'genius' came up with that idea?
Posted by J Van Stry at 5:05 PM No comments:

Went to my friend's claim yesterday to help him improve the camp some up there. We got a lot of work done, did some brush clearing, put up a tent, hauled a large water tank up the side of one of the hills, cleaned up some more crap that's accumulated there from others.

He just moved onto this claim like a year ago, it's back on a creek he used to prospect on many years ago, him and his dad were the first people to get leases from the owner, something like 40 years ago. So the owner gave him what he thinks is one of the best spots. And seeing it and the other spots around there (the owner owns the entire valley, probably a couple thousand acres) I have to agree he got a really excellent spot.

I do like this a lot better than his previous claim (which he'd been on for over a decade), it's a lot bigger, a bit closer, and there's more room to set up a campsite. He's planning on putting in running water, a kitchen, a shower, and a bathroom. The water tanks he's got are huge, he's got pumps, a filtration system he built, solar panels. It's already looking pretty nice, will be nicer still when finished.

I don't know if I'll do any gold mining there myself, it's a lot of work and the amount you get is usually in the grams, there have been prospectors on the land there for over a hundred years so all of the 'easy' gold is long gone even if you do get the winter floods washing more down each year. It's mostly a hobby for him these days anyway, though he did do it full time once, many years ago. I might give it a go one day just to say that I did it, but not a big fan of panning, and in the end, everything you get has to be panned to get the gold out of it. Unless you're doing a big operation, with all of the money and equipment that takes, you don't find nuggets anymore.

Still was nice spending a day in the mountains, and some time swimming in the creek. It's still up pretty high because of the runoff from the snow melt.
Last picture is of the camp from way on the side of the ridge. 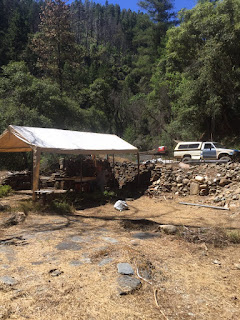 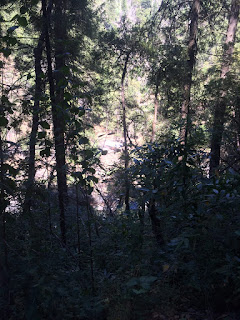 Yes the made in Mexico Nabisco products suck.

I heard people talking about how the Oreos weren't that good anymore, now that they're made in Mexico. They're right, they aren't.

Went out and bought a box of Ritz Crackers today (the old big box ran out a while ago) and tried one. Hey! That's not a Ritz, it's not even a cheap imitation of a Ritz. I look at the box, yup, made in Mexico too.

So in order to save a few bucks, they totally destroyed the value of their brand. I can buy much cheaper alternatives that actually taste better now. I guess they were tired of being in business, cause they just lost mine, for life. And I've been buying their products for decades.
Posted by J Van Stry at 4:52 PM No comments:

If it's not one thing, it's another

So, got some unfortunate news today. Now to find out just how much it is going to cost me.
If I get really lucky, I'll get that money back, but I'm not going to hold my breath.
Posted by J Van Stry at 7:48 PM No comments:

So yes, I tried my hand at vending at BLFC. Mostly I was doing it to gain experience at vending, and learn what I needed to know about it. I was already planning on going to the convention, as it's local and I've been going since it started a few years ago.

I learned from being a vendor that I pretty much have everything I need. I did borrow one rack from someone for doing displays, I will need to buy one of those, and a cashbox (borrowed one of those as well). Otherwise, I have what I need.

I also won't be attending any furry cons anymore. While BLFC was very well run (a rarity among furcons these days) I realized that there was absolutely nothing there of interest for me anymore. No one is interested in writing, or reading, anymore. There are no writing tracks, there is nothing for authors.

I've got zero interest in fursuits, or some of the kinky sex fetish panels (of which there are now quite a few). The fandom has now diverged completely from those things that once interested me (and well, I know more than enough about kinky sex that I don't need to go to any panels on it!) Also I no longer contribute anything that the fandom is interested in (writing, lectures on training and caring for big cats, the bar) and while I still know a lot of people there, that's hardly a reason to go to a convention where they're all too busy to be social anyway. So the truth of the matter is, I'm done with furry.

Instead I'm going to start going to regular scifi and fantasy conventions like I used to, as there is a lot more appreciation for authors, writing, and things science fiction and fantasy there. The whole reason I started going to conventions in the first place. I just need to start finding out which ones are within a reasonable traveling distance.

So yeah, busy weekend (it started on Thursday), but not a fun one.