Where do I find audio book customers?

So, I was talking to the man who is currently doing my audio books today, as they'd just finished Past Tense, book 1 in the Days of Future Past trilogy (look for it on Audible in about a week, unless Christmas slows them down) and I wondered:

Where do I find people who like audio books?

I wonder about this, because I want to try and go and advertise there. I want the audio books to do well, because I want the people who are making them to make money. So they'll make more of them. Which is a nice simple logic. The problem is, I don't know much about the audio book business. I don't listen to them, and I really don't have any friends who do. So I don't know how to go about finding audio book customers.

So if you know of a good place for me to go and advertise, please let me know!

Oh, and here is the link for the Wolf Killer audio book on Audible:
http://www.audible.com/pd/Sci-Fi-Fantasy/Wolf-Killer-Audiobook/B01N07TDK2/
It can be found on Amazon and iTunes as well.

Now in Paperback and on KU (for a limited time only)

Loose Ends is now available in Paperback, on both Amazon and CreateSpace.
It is also in the Kindle Unlimited program, but only for the next three months (which is the minimum term for KU). So if you want to read it in KU, don't wait too long! Once it has completed the 3 months, I will be taking it 'wide' to the other ebook stores (you can't do that if you're in KU) and I will be doing that with my other books as they time out of the KU store as well.

Loose Ends is now available on Amazon in ebook format, the print version will be coming soon. It will also be available on other ebook stores soon, once I get those accounts restarted. 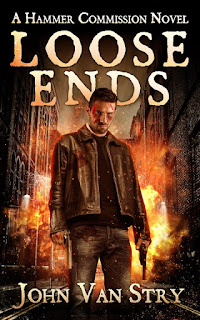 Pulling out of Kindle Unlimited

I think I'm pulling out of Kindle Unlimited. Why? Well, it's really hurting me. I lose one third of my royalty on every book sold via KU. Because so many of my readers have moved to KU, the loss in income for me has been close to fifty percent.

That's a lot of money.

So my choices were, either raise the price of my books on my non-KU buyers, artificially pad my ebooks with stuff to inflate the word count and increase the KU rate (which would only work if people actually read the inflated stuff), or pull out of KU.

Also pulling out of KU will allow me to sell my books in places other than Amazon, and while I don't think I'll see a lot of sales via the other markets, if I see a one third increase in sales on my paid (non-KU) sales, I'll be making just as much money as I am now. If I see a 50 percent increase (which means I keep only half of my KU readers) I'll see an increase in my income, to last year's level.

Honestly, I'd rather not pull out of KU, but financially, KU is killing me. I just can't afford it anymore. Yes, this move could do me in as a full-time author, I'm sure I will see an initial drop in my sales. But I won't know until I try. I know the books coming out of the publishing houses are never in KU, however they seem to do just fine on their sales.

If Amazon was to offer more than half a cent per page, I think I would stay with them, the problem however is just that the KU program has been very successful for them. But not so much for me.
I hope I don't lose any of you in the process, I think my price of 3.99 is a bargain, I honestly think that even at 4.99 I'd still be a bargain, but I'm committed to try and stay at 3.99 for as long as financially possible.

Thank you all for your patronage,
-John Van Stry
Posted by J Van Stry at 1:30 PM 6 comments:

Just finished the first draft of the next Hammer Commission book: Loose Ends. A hair shy of 80K words. I suspect it will grow a bit more in the first re-write as there are two chapters I need to drop into it. Short ones, but they've still got to be added.
Now to commission the cover while I get it ready for publication. I'm aiming for the 15th. Let's see if we can hit that target.
Posted by J Van Stry at 3:48 PM 3 comments:

I'm Thankful for all of you

With Thanksgiving having just passed, and with Christmas on the way (and with the last book I'll be putting out this year nearing completion), I've had a few minutes to think about things. Like this last year, and the year before that.

All of you have made this very worthwhile for me, and I really do appreciate you all, very much. Thank you, again, all of you. I hope 2016 was a good year for you, and I hope that 2017 is a better year still.