Off to LibertyCon in Chattanooga for the weekend.

I'll be there for the weekend.
Posted by J Van Stry at 1:19 AM No comments:

Things have been incredibly hectic here for the last several weeks. As some of you may know, I'm in the process of buying a house, out of state. This involves a lot of travel, and as the first house we went to contract on turned out to have serious issue (like $50K minimum to fix issues, probably more like a $100K), we had to drop out of that and start all over.

So now I'm in contract on another house, and this one looks fine. But I have to fly to Chattanooga at the end of next week for a convention that I really want to go to (LibertyCon - if you're there, look me up) and as I'm doing a panel, well, I'm gonna be busy some more.

And don't even get me started on the lawsuit I'm about to file to protect my copyrights, against someone who doesn't seem to understand that violating them is a crime. (BTW premier law firms ain't cheap!).

So yeah, it's been busy. I'm hoping to pass the halfway mark on 'Take California' today. I'm also hoping to order the cover at some point today as well. I've got several days of (hopefully) uninterrupted time ahead of me, so I'm hoping I can get the first draft finished here in the next few days. It's just been very very very hectic.

So I haven't forgotten about you, or the next book in the Valens Legacy, it's just been busy.

On the Audiobook front, the next one will be released next week, and Podium Press has indicated that they will be doing books 7 & 8! So now I have to write 9 & 10, so they'll do them too :-)

Thanks to all of you for everything!
Posted by J Van Stry at 12:17 PM No comments:

Just released this morning, the first installment in a collection of short stories as told by Sean's wives in the Valens Legacy series. This book contains two short stories about Roxy and Jolene. 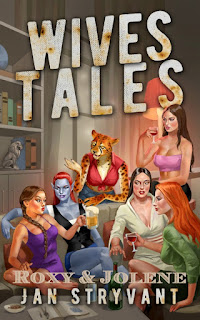