Why does Amazon allow 1 & 2 star reviews on my books by non-verified customers?

I only ask this because I gave a 2 star review to something I received for my birthday, bought via Amazon.
And they deleted it.
Posted by J Van Stry at 12:29 PM 2 comments:

Spilling the beans, on Children of Steel

Okay, was writing on someone else's blog today and I decided I would finally spill the beans on the major trope buried in Children of Steel that NO ONE ever seems to get. Even the people at TV tropes, where this book has a page, have never gotten it.

So yes, COS is about the future, a future in which we have genetically engineered second class citizens based on animals. They exist because of labor shortages: basically people don't want to work because the standard of living of sitting on your ass at home has gotten good enough that you don't have to (sound familiar btw? Remember this book was written originally in 1990 - and no, that's not the buried trope). I wrote this book long before I had ever even heard of 'furry' or 'furry fandom' btw, it was more in the vein of Cordwainer Smith and his 'animal people'. Though as someone who owned and trained wild cats, and was up on what a lot of Geneticists were doing, and who was following the human genome project, there were some fertile ideas there.

Now, I have gone and dropped hints everywhere, especially in later books in that world, as to why things were the way they were. Multiple races in order to make it harder for them to have things in common to unite against humans. No human 'supermen' because of fears that they would take over (and you wouldn't be able to easily find them), and a few other reasons as to why they were made the way the were. There is even some discussion as to if they are engineered to have certain behaviors, which can be used against them, one way or another, or to control them.

But the one that I thought was the most obvious and which was alluded to constantly but which everyone seems to miss, is based on this old quote:


"Give me a child until he is 7 and I will show you the man." -Aristotle

That is the major background 'trope' in the whole series, it forms so much of the stories, the society, and it is even reflected in the title, which comes from the song 'Types' by Living Color. It is mentioned, more than once, that the government comes in and provides all schooling for the 'animen' for the formative years of their lives. They are taught and trained where they are to be, and what they are to be.
And I must admit that I am incredibly shocked that so many people have missed this. Especially when countries like France have recently embraced this philosophy by mandating government pre-schools for children. Much of our own school system here in the USA have been taken over by a particular political group who are using them to instill certain beliefs and behaviors in students today, which we are now reaping the harvest of, when we see all this micro-aggression bs, and the movement to stamp out free speech coming from our schools today.

Then again, maybe that is why so many of you are missing it, because you're actually living it.

I find it interesting though, that a book I started writing in 1990, which I published in 2011, is still dead on, on politics and what is happening with society, twenty plus years later.

An interesting commentary. I have another theory as well as to why scifi is declining, but this is definitely a part of it.

So, a friend said, 'you should go on Good Morning Sacramento,' and I was thinking they wouldn't be interested in me, but he said his wife had been on several times for her business, and he told me to write Cody on the show.

And he said to come on down!

So here's me on TV this morning:

Honestly, it was a lot of fun, Cody was a great guy, Melissa was also really nice. Best of all I didn't make an idiot of myself. The sound guy who set me up (I'm sorry I forgot his name) was great and even the security guard out front was really cool.

It was interesting watching them all work, it's a busy place and there is a lot going on, and to be able to go from work one moment, to chatting with an guest before he goes on, and then back to work without missing a beat is an impressive skill. It's always nice watching professionals work.

And yes, the green room was actually green.

So the new book is doing well, it was at #5 in Myths & Legends for a few days, but has slipped back to #6 this morning. So that means if you haven't bought it yet, buy it now! :-) And if you have, well, buy a copy for the family, the wife, the kids, the neighbors next store, and that kid walking down the street! ;-)

Anyways, I just want to thank you all for buying my book and supporting me, I appreciate it!

Here's the link: (Blogger is being a pain today, so no embedded pics)
http://amzn.to/1W8LViG
Posted by J Van Stry at 2:35 PM No comments:

Yea! After three days, they finally fixed it.

And of course I'm in the top 100 of three categories, as expected.
Thanks everyone!
Posted by J Van Stry at 3:39 PM No comments:

This time it's Amazon issues

Sometimes I can't win for losing. The new book is selling well, it's ranked about 3400 overall on Amazon right now and will hopefully continue to get lower numbers. BUT Amazon is NOT ranking the book in it's categories. When it fell below 4000 it should have shown up in the top 100 of all of it's categories. BUT they're not ranking it.

Nothing. Without it getting ranked, it won't show up in the top 100 lists, which or any other lists, which is the Amazon promotion that gets other people, who haven't read my stuff to read it. It is a key part of the Amazon sales demographic. And Amazon isn't doing it for me, and they're not fixing it. This will kill the entire launch if not fixed soon.

I am so screwed. Again. Obviously the universe doesn't want me to be an author anymore.

Here's a picture of the relevant stuff to show that yes, I did it right: 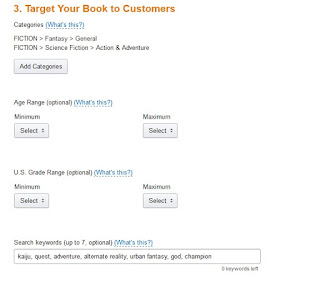 Portals of Infinity: Kaiju (Book 7) is now available on Amazon

Here's the cover, expect to see the book up for sale by tomorrow: 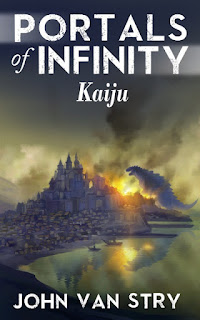 Got the rough draft on the cover this morning

I love my cover artist. This morning he sent me the concept sketch for the cover. Really like the way it looks! Won't be surprised if he has it done Monday. He's really good on getting my covers turned around rather quickly.

Did a proof read edit today. Got back a bunch of questions/comments/critiques from the first of my beta readers, tomorrow I'm going to read and address those. Hopefully I'll be hearing from the others by Monday so I can have this all ready to roll out as soon as the cover is done. I'll be in Reno next weekend, so I very much want this book published before I go.
Posted by J Van Stry at 12:22 AM No comments:

Cover for Book 7 has been comissioned

So, just waiting for my artist (Dane at ebooklaunch.com) to get back to me with the initial drafts on the cover. That could be anything from tomorrow until Tuesday, depending on how busy he is. I'm fairly certain I'll have the cover by the 12th, he's very dependable.
Hopefully my Beta readers will have gotten back to me by Monday, and just as hopefully there aren't any major flaws that I've missed.

With the way this month has gone, that may not be a bad thing.

Still waiting on getting my money back. They'd originally said 'five days' and well, it's five days and nada. Maybe I should go into bank fraud for a living, it sure pays well and I bet you don't even have to declare your income to the feds!

Anyway, keep your fingers crossed, and hopefully I'll be able to launch next week.

Portals of Infinity : Kaiju
Posted by J Van Stry at 1:00 PM No comments:

I was going to start the 1st re-write today, but between having to run to the credit union across town, then to another branch, then out to buy a battery to replace one that turned up dead on Sunday, it's been a very busy day. Maybe I'll be able to start tonight.

Part of the problem (well most all of this stems from the same issue) is that with my bank account getting hacked during what was a very short month income wise is that I have to wait until all of this settles out and some of the funds start coming back before I can commission the cover.
Then I have to wait a week for the cover to be finished.

So it really depends on how difficult it is to recover money stolen via a debit card, it's not like a Credit Card where the money never goes through, Debit Cards are almost instant, so you have to wait for the bank to get the money back. Or at least decide that they will eat the loss and pay you back for it. Hopefully that will only take a week.

I wanted to have this out well before the 13th, as I'll be away that weekend. Right now, that may still be possible, but it won't be easy.