Hi Everyone, just got this:

Here's your friendly heads-up that the release date for No Regrets (The Valens Legacy, Book 17) will be March 24th, 2020. The assets were recently submitted to Audible, so the listing should be up in the next week or so.
Posted by J Van Stry at 10:39 AM No comments: Links to this post

I would like all of you to sign up for my mailing list. With the way Facebook has started to throttle posts related to, well, damn near anything, it's getting harder for me to notify you when a new book comes out.

The mailing list info can be found on my blog, webpage, even in the back of my books or author central on Amazon. I only send out updates when I publish something, though I think I will start attaching a bit more information to those mails, to let folks know what's on the roadmap for the future.

Just put TakeTwo in to be published

About to head out to the airport to fly to SLC, but I put this in for processing a few minutes ago. Hopefully it'll be live sometime today.
Linky-> https://www.amazon.com/dp/B084PZSGBC/ 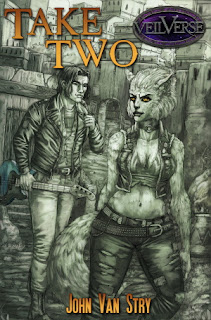 I'll be in Salt Lake City Next Week

I will be at LTUE in Salt Lake next week. I don't know how many of you live in the area, or will be at LTUE, but if you are going to be at LTUE, drop me a line.
Posted by J Van Stry at 8:02 PM No comments: Links to this post

So the Veil Verse book is done.

I finished it last week, and I'm just waiting on Will's approval (Blaise really enjoyed it) and the cover artwork to show. I haven't sent it to my editor yet, I'll probably do that in a few days, I want my Beta readers to finish with it first.

The title of the book is 'Take Two' and it will be published under John Van Stry and not Jan Stryvant. Most likely it will go live early in February.

I may have a Shadow short or Novella out next week. Depends on how much work I can do over the weekend, and how much Star Citizen sucks me in...
Posted by J Van Stry at 3:35 PM No comments: Links to this post

So, someone mentioned to me that I hadn't posted here in a while, so I thought I should perhaps catch everyone up. I have been working, the first draft of the Veil Verse book is almost complete, and I'll hopefully have that off to Will and Blaize soon, so I can find out if I'm okay, or if I mangled their universe horribly beyond description.
I did end up taking off pretty much all of December.
I do have plans for a bunch of stuff this year and I'm starting to work on some of it, I just needed a bit of a break after all of the work on Valens, which pretty much was non-stop for two and a quarter years. It was like one of those big rock tours where you spend every moment in a new place working your butt off but not getting to see the sights :-)
I do want to do a portals of infinity book next. I have some plans to turn out a few more Shadow things, hopefully in the near future. I also have a short series I'd like to write between now and any future Valens series. I've already done some work on that, so I do want to develop it more.
I'm also thinking of a possible stand alone Valens novel, something to span the space between the two series. Probably a bunch more short stories at some point as well. I just need to work on my roadmap for this year.
So yes, I'm still writing, just took a bit of a break before getting back up on the horse.
As for audio books, the next publishers pack, should be out Jan 28th. The last audiobook for Valens (which will be coupled with - I think- the last set of short stories) should be out March 28th.
The next Portals of Infinity audiobook, well I talked to the guy who has been doing them for me, and he's going to let me know whats going on with him, his day job has been working him long hours lately, so he hasn't had any extra time.
For those interested in the Hammer Commission series (which for those of you who are Harem fans, yes there are some harem aspects) I will be writing more in that world. But I don't have a date on anything at this moment.
I'm also on Patreon, and while I know a lot of folks can't afford a regular $5 a month contribution, I am going to see about giving something to the $1 crowd as well, to thank them for their continuing support. I probably should redo my patreon, but I think I've already got more than enough tasks to manage, so I don't want to screw it up.
So hopefully that wasn't too confusing.
Posted by J Van Stry at 10:03 PM No comments: Links to this post