I've begun to emerge from the funk that my life has been in for the last five or so months. A lot happened since the end of last year, I finished a series (Valens Legacy) that had consumed two and a half years of my life (And it's really not done, there's a possibility of a series being bandied about in Hollywood). The lawsuit got very heated and hectic and expensive during that time. It's actually now finally over after like the 6th of this month (that's when the ability for the other side to enter an appeal expired).
Then there was my mother's failing health and eventual passing. Which makes my cat getting cancer and dying the month before seem like a minor deal (even if it wasn't to me). A few other minor legal issues that I've been putting off dealing with, the need to take a vacation, a -real- vacation, but not being able to because of the current state of affairs (and also having my once a year vacation canceled and losing a lot of money on airfare when it was).

So yeah, been a few rough spots there. Thank the good lord that those are all in the past.

Going forward, I am working on a plan to get ALL of the Portals of Infinity series recorded under one artist (or perhaps a man/woman team). This won't be cheap, because it's over 70 hours long at this point (it'll probably cost around thirty grand). I need to write an addition 30K words or so to make this happen, for legal reasons.

You see, I want to combine books 1 & 2 and books 3 & 4 into two recordings instead of the current four, because they each run about 5-6 hours in length. Back when I created those audiobooks, short books were okay, Audible didn't discriminate against books under 10 hours. However now they do, they've changed the way the market works completely. But I can't just put them together because the people at ACX are assholes. And I have to go through ACX. Also their contracts are 7 years long and they do tend to play fast and loose with the contract terms. (Note above 'need to hire a lawyer' comment).

Another reason to re-record the older books is that first I'd be on the third VA (Voice Artist) for the series, and that's just not fair to the listeners. Second, I want to increase the quality of all the recordings. Some are not apparently up to the level they should be. I realize that I'll probably not make back the money on the first four books when I redo those. I may make back the money on the fifth one. The rest, as they've never been recorded I expect to make the money back on.

Portals of Infinity was the first series I ever turned into an audiobook, and it was still a new frontier when I did it. The rules have changed drastically since then and costs have gone up a lot while royalties have dropped significantly. However I've learned a lot in the process so I'm hopeful that going forward things will improve.

On the story front I actually have several things I'm working on, and there's a bit of juggling going on. I have to do the 30K words mentioned above. I have a new series under my pen name in the offing. Results of that will probably be seen in September. I have a sequel to Take Two that's being worked on, though it's been pushed to spot 'b' in my queue now. There's also a space opera thing I've been messing with for a while now. I'm debating a rewrite on it, but I need to think about that. It'd be under my name and not the pen name. At least I think it will. There's a bunch of shorts I need to write as well, for a number of different things.

I don't know if I'll be able to get these on a schedule. I used to work like that but I developed some bad habits in the last year. We'll see if I can get back to that.

Oh, and as long as Consequences does well, there will be a book #10.

Portals of Infinity: Book Nine is on Pre-Order for Saturday!

Portals of Infinity: Book Nine: Consequences, is available for ordering!
It will be released this Saturday, on Amazon 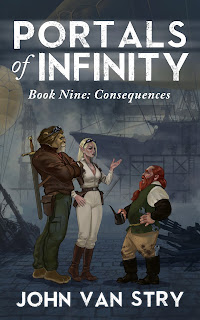 If someone sold Portals of Infinity T-Shirts, would you want them? What about other series?

(and as an update, POI #9 is at the editor, the cover art is in Progress. Take Two: Encore is in progress. 'Everyday Including Holidays' the next book in the Valens Legacy - it's going to be a bridge book of sorts - is in the concept stages with some writing done).
Posted by J Van Stry at 9:39 AM No comments: