In the search for answers I'm putting one of my books up for free from tomorrow for five days. This is probably my worst selling book ever and someone told me yesterday that the story was good, they just felt the cover was giving people the wrong idea? So take a look (if you want) and feel free to tell me: Does it suck? Or does it need a better cover? Or is it something else?

Just caught a 3-day ban on facebook for advocating for self-defense against violent mobs.

So yes, there is a New Portals of Infinity book out... 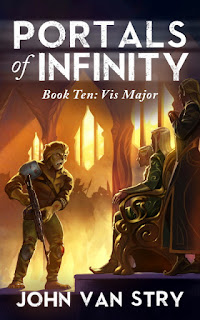 And the re-recorded / re-produced version of Book 5!

The Portals of Infinity AudioBook Kickstarter

Hey everyone! Well the Portals of Infinity Kickstarter is down to 8 days, as it ends on May 9th. At this time books 6, 7, 8, and 9, have been funded! Which is great. The next goals of this kickstarter - where the funds will go next as it continues to grow - are the re-recording of books 5, 4, 3, 2, and 1, in order to have them all with the same Voice Artist (Jessica Threet).

Now for those of you who haven't pledged yet, I would like to point out that for a mere $30 you will get Seven, count 'em Seven, audiobooks. You'll get books 3 , 4, and 5 with the current Voice Artist (Dusty) and then you'll get book 6, 7, 8 and 9 as they each come out. If any of the first five are funded to be re-recorded by this kickstarter, you will get each of those as they come out as well.

That's a lot of swag for thirty dollars, right?

I also want to take the time to thank everyone who has already pledged money to this kickstarter. This is my first one that I've ever done, so yes, maybe I undercharged, but the response has been overwhelming and I'm very excited by just how well it has gone. I've been told that in the last week I will see another surge in donations, and I hope that's true, as I would love to be able to have all of the books in this series done with a single Voice Artist, instead of three.

Thanks all of you!