Book review and a recommendation


Pam Uphoff is one of the writers on a blog I read and often comment on, (Mad Genius Club), and a week or so ago she had put up an article on bit characters who got carried away and ended up with more of the story than they ever were intended to have, and could sometimes run off to do major things later on. This really isn't that uncommon an occurrence, my novella 'Dialene' is about a bit character from Children of Steel who didn't even have a line of dialogue in that book!

So yeah, these things happen.

But I found the bit she put up about one of her recent books 'Dancer' ( http://www.amazon.com/gp/product/B00KI8KLOY - which is book number fifteen - Long Series!) to be very interesting, so as I'm a KU member, and the book is in KU, I figured I'd check it out, why not? Technically it's free.

And yes, I'm glad I read it. Don't let the cover fool you, it is definitely not just a book for women. It's very much a good action and adventure scifi story, and even though this is #15 in the series, this one definitely can stand alone. I found the first few pages a little confusing, because yes, this is a sequel in a series, but that didn't last long. Things were explained and done well enough that it didn't intrude into the story or into the flow of the story. Not once in the story have I run into anything that I couldn't understand because I hadn't read the prior books. If past knowledge was necessary, it was always there, as a comment or reminder, or worked in seamlessly in some manner.

I really enjoyed the story, and I would recommend that you at least check out the sample to see if you like it too. It's very much a futuristic world, where humanity has been subtly changed by a bunch of cross dimensional visitors who were stranded many hundreds of years ago, and whose genetic heritage has had some major effects (as well as their political ambitions). It's a very different world and society now, but not different enough that you can't understand it easily.
Posted by J Van Stry at 3:28 PM No comments:

Overall, the convention was good, even if I was only there for one day. I spent most of my time talking with old friends and acquaintances, and I even allowed myself to tell some old stories about things I had worked at or done many years ago. Normally I try to avoid those, because they're all past history, and I do enjoy hearing other people's stories.

The presentation went well, the crowd was smaller this year, but the con moved all of the panel rooms to the other hotel, which is on the other side of the convention center from the main convention events. Which is pretty stupid. So panel attendance was down overall from what I could see. I still made a few good connections however from the panel. I also found that my new set of slides caused me to run a bit longer than normal, so I may have to edit them down a little bit.

Need to put them up online today as well.

I think this sums up my mood for today: 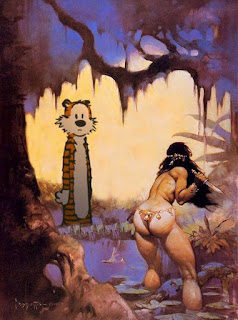 For those of you who have been looking at the chapters I put up recently on my Patreon Account, do you think I should continue that story in 3rd person, or go back and do it in 1st?

For the rest of you who have read what I've published so far, the same question: Do you prefer my 1st person viewpoint style over the 3rd person, or does it make no difference to you?

Really been wondering about that a lot lately. I've been doing the current story in 3rd, because the story is in the Hammer Commission universe, and that story was written in third for a couple of particular reasons. But the POI series is all in 1st (as well as the COS stories) and I'm wondering if I should take the story I'm currently working on (King of Las Vegas) and flip it over to 1st person instead.

As I'm about a third into KOLV, I'd need to make that change soon, if I'm going to make it at all. But I'm curious as to which style my readers prefer.

I will be at Further Confusion Sat, the 16th

I'll be doing a panel on self-publishing on Sat the 16th at Further Confusion in San Jose at 11am, till I think 12:30 or so. I'll probably be at the con until 8 or 9. I'd like to be there longer, but don't have anyone to watch the dog.

If you want to stop by, feel free. I'll probably be hanging out around Rozga's table in the dealers den quite a bit.
Posted by J Van Stry at 12:16 AM No comments: