Hey everyone, I will be running the following promotion on the Amazon store and the Amazon UK store for Christmas:

Mihalis - us only (due to an Amazon Promotion)

Book One: Champion for Hire

I will see about adding Take Two and the First Dan's Inferno books, but as they're no longer in Kindle Unlimited (too many problems with the KU people) it's a bit more involved to put them on sale.

(and I'm still avoiding Social Media right now, so I'm sorry if I haven't been replying to any posts or pages).

So, Yes Been Thinking

Lot of blog posts this week. Wonder why? ;-)

So I've been thinking about things, obviously and I've realized a few things as well. First off, I shouldn't be unhappy that a lot of folks didn't want to spend the $8.99 for the Summer's End ebook when I've made a friggin' career out of always having low prices to try and make it easier on my readers. I mean, seriously! I took forever to go to $4.99 and I think I may STILL have some books out there at $2.99. Definitely more than a few at $3.99.

So it's pretty mean spirited of me to bitch about this. So mea culpa.

Will I be writing the sequel? Probably. It's on my schedule to be written in January so I'll probably still be doing it. Will it ever be sold? Probably not. I haven't heard word one from my publisher, so I'm thinking that they're not interested. December is definitely the worst time in the traditional publishing business to release a book if you're not somebody famous. I guess they may be waiting to see what happens in January - but for me, I've moved on.

I think I mentioned somewhere that one of the 'lower level' folks who works there that I was talking to mentioned they were considering putting the book up for an award. One I wouldn't mind having though I honestly know I don't have a prayer of winning. Who knows? If they do, maybe that'd rekindle sales but again, no longer my concern.

What I do need to do is focus on the here and now. If I'm not going to be writing books for them, (they've been rather quiet the last two weeks and for me 'quiet' equals 'bad news' - but who knows, maybe I'm wrong on that) that will free up a lot of time this coming year and while one of the two series I was looking to write for them I won't be writing unless they ask me for it, the other I'll write for myself, which also means you lot :-) I also of course have a few more things Valens that I want to get done.

So with the end of the year coming up it's time to move on to new things. Yes, I'd hoped to be able to be successful as both a traditional published writer as well as an indy writer. Barring a miracle, that is not to be. C'est la vie.

Again, I very much want to thank all of you for having been there and for having supported me. It has meant a lot to me, and again, I shouldn't have been unhappy over folks who just couldn't afford it. Or chose not to spend that much, especially on a new genre that they don't have an interest in.

Last of all, I'm not going to be on Social Media much for a little while. I'm trying to 'break' that addiction so I can spend more time writing. It's become a bit insidious how much of my time it has come to consume. I'll still be on Patreon & SubscribeStar of course, and I do pop into my discord a couple times a week. But I want to see just how long I can stay off of Facebook, Twitter, and Mewe.

Merry Christmas, Happy New Year, Happy Hanukkah, and Happy all those other holidays which I know happen around now but I'm not exactly sure when.

So today I started out with an hour long drive (each way) to the 'local' big bookstore. So I could give them some signed copies of the new Summer's End book, so they'd have some to put on the shelves. Apparently books released in December don't usually end up on the shelves until January because of all the promotional stuff going on in December. They sit in the chain's warehouse.

If only I had known. So get home, the gate doesn't work (still- it didn't let me out this morning either so I had to open and close it by hand). After lunch I checked it out, the batteries in one of the remote sensors you're required to have for 'reasons' were dead. It's working now.

Yeah, eye-opener. So spend the next few hours first on the phone, then finding out I've been filing one of the local state reports to the WRONG agency and so max penalties - with interest. Isn't it funny how they always wait until your penalties are up to a certain point before they notify you? But the nice thing was once I went back and FILED (electronically too) the proper form with the proper place, I only got hit with a 50 dollar fine on the last four, so that was a lot less money. I may be able to get some of that money back as well.

I will say this about Texas - their tax help people are the BEST. Hands down. They will take the time to walk you through everything so that the absurd fines go away and then they'll tell you how to appeal the regular fines so hopefully you get that money back as well. Honestly I'm starting to wonder if the whole reason the absurd fines exist is to get you to file the stupid paperwork, because as soon as you do, those fines (and the interest on them) goes away.

So yes, it's been an 'exciting' day. I'm starting physical therapy for my shoulder, now that it's mostly healed. Doc still wants me to replace the joint. I may in a couple of years, we'll see. But I'm not looking forward to that at all. It's still sore and annoying, but it doesn't hurt like it had been and of course the muscles that had been paralyzed are now working again.

Oh, and my office chair died yesterday. At least I had one in my shop I can use for now. Been a hectic week.

Another Valens Heritage Book is out: Ain't It The Life

Yes, I have a new Valens Heritage book out today. The cover art unfortunately ran a bit late or I would have had this out last week. I just hope this doesn't take away from folks looking to buy my other new book: Summer's End.

Anyways, I hope you all enjoy it!

Ain't It The Life 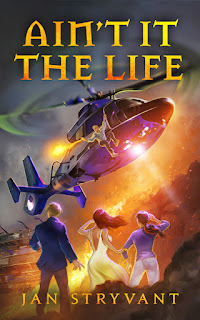 Here's an interview on my book that comes out tomorrow!