Interregnum is now live on Amazon!

Here's the link to the book on Amazon:

The Sequel to Children of Steel is Posting to Amazon

The sequel to Children of Steel is complete, the title is Interregnum, and I will be posting it to Amazon for sale in a few hours. So it should be on sale sometime early tomorrow morning (Saturday). 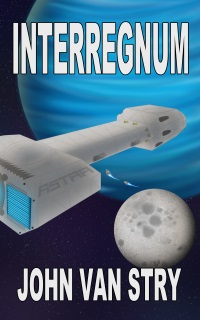 The cover for this one was done by Rozga (http://rozga.weebly.com/) That is what the Astra looks like minus the cargo containers that it usually hauls.

If you look to the right of this page, you  will see that I now have a patreon account.

The primary reason for the account, is the same as for most of the others that people have out there: To help me cover my bills and allow me to write full-time.

Being an artist or a writer is a difficult job: You don't get a regular paycheck, and your pay varies significantly from month to month. Book sales are cyclic, and you always know that some months are going to be slow. So hence the Patreon account. Basically by contributing you are making it easier for me to be creative and write. To devote more time to creating more of the stories you like and want to read, so I don't have to take consulting side jobs to cover expenses, during which I'm often so busy that I rarely can spare the time to write anything.

I have set up a few rewards for people who donate more than just a few dollars, to show them that I appreciate their contribution. Of course being new to this I'm still looking at the page and wondering if I should make any further changes, so suggestions are welcome.

INTERREGNUM the sequel to Children of Steel

The sequel to Children of Steel is finished, mostly. I need to send it to my editor, and I will send out copies to my Beta readers, just to be sure that there aren't any issues that I may have missed.
Barring any unforeseen issues, it will be available on Amazon before the end of the month.

There is a sequel to this story, that I plan on writing eventually, it is sort of a convergence of several of the threads of the 'universe' that cross each other at one point. How soon I get around to writing that story will depend somewhat on how well this story does. The better it does, the sooner I can justify writing the sequel.

I will now be starting book five in the Portals of Infinity series, as I'm getting a lot of requests for that, and that series right now is selling extremely well. So I owe it to the people reading it, to get out the next installment in a timely fashion.
Posted by J Van Stry at 2:19 PM No comments:

So, the sequel to Children of Steel​ is almost done. Got 5K written yesterday and now I just need to rewrite one scene, tie two parts together and that's it for the first draft.

After that, do the first re-write and edit, send a few copies out to some beta readers, come up with a title (!), then send it to my copy editor, and start on the cover. So it should be done by the end of the month. I hope to get it out by the end of May.

Lost Souls will also be coming out soon, I need to do a quick rewrite on that, and send it to my editor, and get a cover done. Lost Souls is a fantasy story, more of a Young Adult (YA) type. It will probably come out in early June.
Posted by J Van Stry at 2:12 PM No comments:

Status on the next book

I'm currently working on the next novel in the 'Children of Steel' universe (I really need a better name for that universe, but that was the name of the first book I wrote in it). This book will be a sequel to that first book, picking up about where Children of Steel left off.

Right now I'm about 50K words into the first draft, it will not be as long as the first book (which was over 170K!), though if it does well in the market, there will be more released in that 'universe'.

This is a bit of a risk for me, but I have gotten quite a few requests for a sequel, so I decided to take the time to honor them, and see if there was enough of a demand to write a line of stories there, as well as the current POI series. As I hope to publish in a few more weeks, I will just have to wait and see.

As for the next Portals of Infinity book in the series, right now I have the basic plot and the title:  Demigods and Deities. (Yes, sometimes I do come up with a title before I start a book!) I will be starting work on Book Five as soon as I finish the current COS story and send it off to my proofreader. My target date for publication on Book Five is currently set for the end of June.

And no, the title does not mean this story will have something to do with the old D&D book with a similar name.
Posted by J Van Stry at 2:45 PM No comments: