So yesterday I took the body off the stand and took a couple of pictures. On the first one, you can see that there is a fair deal of orange peel on the body. That's because it needs to be level sanded, and then polished. Not sure when I'll get started on that, maybe sometime during the evenings in the coming week. On a body that big, that's going to be a long job.

The back of the necks are completely finished. Because they're a satin finish (as I've mentioned before I hate gloss on necks, it makes your thumb and hand stick, they don't slide as well). I also need to level all of the frets. The guitar frets have issues as you move up the neck (away from the pegs) the bass a little as well. Now that I have a leveling bar, the leveling goes a lot faster and is easier. Recrowning and polishing though still take some time.

I also posted a picture down below with the necks set in place, just to give a few ideas of what the finished product will look like. The bass pickups on this one are 'Soapbar' pickups and I was looking to get higher quality ones, but Soapbar pickups are over a hundred dollars a piece! I don't know if I want to go that route on this one. I may see if someone makes any kind of 'adapter' so I can put a different style pickup in there, but I'll probably just go with the cheap ones that came with the kit and upgrade later if I don't like the sound.

The guitar pickups are regular humbuckers and I think I'll probably go with the kit ones for now and change them later if I don't like them. I'm still thinking of changing the wiring and I've figured out two options, both of which involve replacing the pots that came with the kit with dual pots, so regardless of selector position, the pots will always be directly wired to the pickups. Basically each pot would control two pickups. The choice right now is one knob or two concentric knobs. With one, the pots are physically slaved together. With two, you can adjust them independently. I'm leaning towards the second option.

Right now I suspect I won't have this one finished until the end of October, soonest. Then I'm going to see about getting a planer / joiner and a bandsaw and see about making the bodies at least, from scratch. 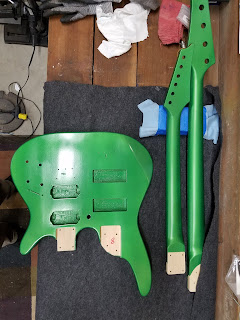 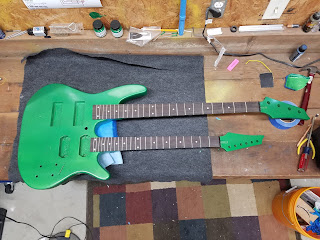 Sorry I didn't post this earlier, but I had to run into town this morning for a meeting and it slipped my mind when I got back. 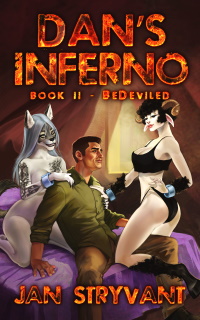 I don't have any good pictures right now, not any that would really do it any justice at least, (the one on this post is after only 5 coats), but I finished the clear coat on the new guitar. 15 coats of gloss on the body, ten on the paddle (that's end of the neck where the tuners go) and six satin on the neck.

Tomorrow I'll take it off the stand and hang it someplace out of the way for a week or so. At some point I need to check all the frets and see which ones need leveling, crowning, edges rounded off, etc. I also need to oil the fretboards. Those will get about three coats of Teak oil.

At some point I should probably order new pickups for it. Put something better than the ones that came with it, as they're undoubtedly cheap ones. I'm debating drilling a second pickup jack in it as well. Right now the design calls for a selector switch, that lets you pick bass or guitar. I'm debating a dedicated bass jack, which would allow for separate amp setups. You really don't want to run a bass through most guitar amps, as they have a tendency to destroy them. But if I do that, then I have to redesign the volume controls as well. So still just a thought. 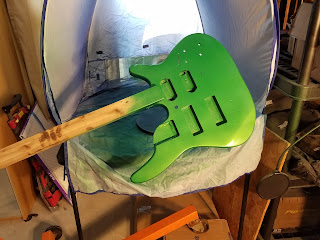 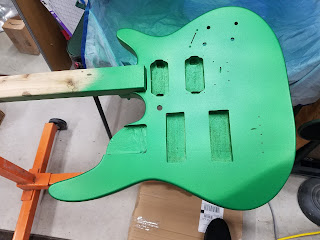 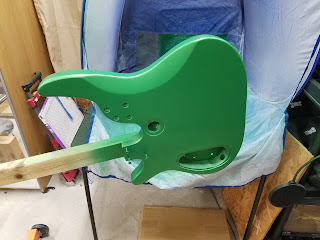 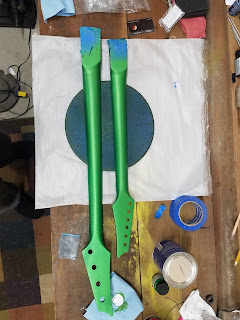 I'll start clear coating later in the week, maybe over the weekend. That takes about 3 days (five coats a day for three days). Then it sits for a week or so to cure. The back of the necks get satin finish, the rest is gloss. The reason for that is gloss finishes have a tendency to stick to your fingers and your hand doesn't slide up and down them as well as on a satin finish.

The Next Guitar Project

Normally I post these on Facebook, but I'm trying to avoid that for a while. For those that follow me there, you know I build guitars as a hobby. Normally I either buy a Chinese made 'Kit' or I buy a body and a neck from places like Warmoth and I pick up the rest of the parts myself from various places.

I then paint and finish it, then install everything. This isn't just a simple matter of spraying it with paint and bolting it together, there's actually a fair deal of work to do and mine tend to have a high gloss finish when done. There's also a lot of set up that goes into a guitar after it's assembled due to the tension of the strings, and what kind of 'action' you want on it.

Today I started which may be the last of the 'kit' guitars. I really want to start making my own necks and bodies. I think I'll start buying equipment for that soon (Planer / Joiner and a band saw mostly). The reasons for doing that is I can now put a 'kit' together in a month or less (usually less, a lot less) and this is a hobby that I want to take up time. So if I start making those parts, it will increase the time of each build.

This current project is a double neck guitar. 6 string and bass. I laid the first coat of paint down on it today. I'll spray the second coat tomorrow. There was one 'oops' with the headstock on the bass, but I can clean that up tomorrow when a respray. The necks are almost perfect with one coat. The body is going to take a second coat. This whole thing is so big that I used up almost an entire bottle of paint on it (they're small bottles, and usually one will paint about two - plus I normally -don't- paint the necks).

I'll post some more pics after the painting is finished. But here's a picture of it before any work is done:

No, I have no idea why POI#8 (The Seven Worlds) is being blocked by Amazon

And I have NO IDEA when it will be allowed for sale again, if ever.

I called them up and all they know is that they have their thumb up their ass and that's about it.

Normally when there are 'quality issues' you get a warning. Well they didn't give me one, they just pulled the book. (and the pulled it last night because there weren't any issues when I was there last night looking at other stuff). So I fixed the issues and re-uploaded around 9am today, and they TOLD me it was back up for sale 4 hours later, but it wasn't.

Again, I called them, they didn't do shit because customer support at Amazon now is in India and they don't know anything about Amazon and can't do anything either. All they do is make excuses and tell you that they can't do anything.

So I don't know when the book will be back on sale.

So yeah, I'm being harassed for some reason. Maybe because I bitched that the quality department wasn't doing their damn job and just left me hanging for a day?

I dumped facebook today. I'll probably still post any announcements that I got there. But it's no guarantee.

So if you want to be sure, either start watching my blogs or get on my mailing list.

This has been a rough year for me. There were a number of family issues and other problems. I couldn't write for most of the year (I was either too busy, too stressed, or just didn't care). I've got half a dozen abandoned novels sitting on my computer that probably will never be finished. The new story was only supposed to be an 8K word short, and now it's 2 books 130k or so and there's more to come. In fact if I can start giving a damn again, I may start writing it today.

I don't like getting driveby reviews from people who are just trying to hurt my sales because they feel taking me down builds them up. I've been getting that shit for years now, but it's finally starting to annoy me. Yeah, sometimes I bitch about stuff. It's only natural. But when people start piling on, I realized that it's time for me to go.

So I think I'm done with social media. It's not helping me, it's just bringing me down. Maybe I'll update my patreon to put up a weekly chat session or something for all of my patreons, if people still want to reach out.